Day 1                 Monday  May 21st  2018
The speaker of session I was Prof Veeranagiah, Associate Professor, Cambridge Institute of Technology. He gave an Introduction to Python Programming. He began the session by presenting a background study on software and programming languages. First two sessions were mainly focussed on the introduction to python and various IDEs. He spoke about the advantage of using python through IDEs and helped us get familiarise with the execution of files via command prompt as well. The faculty had hands on Experience with Assignments in Python in Sessions III and IV. A brief description was given by Prof Veeranagiah on control structures and their syntax. The faculty solved a few problems on programming with Python using Spyder.

Day 2                 Tuesday May 22nd 2018
Dr Hari Baskar led Sessions I and II on development of course material for Python programming for B Sc Mathematics 2nd year Papers. He explained the various functions and also demonstrated the execution of functions in python. He suggested some links to explore concepts. In session II, there was a discussion on development of course material for python programming for B.Sc Mathematics second year papers. The discussion was based on Course Learning Outcomes and Topics for Lab Sessions.
In Sessions III and IV there was a presentation on Linear Algebra and its Applications. The speaker for the session was Dr Ashok Rao, former Head, Network Project, CEDT, IISC. The speaker gave an architectural and a historical perspective of the topic Linear Algebra. He ellaborated on the importance and history of linear Algebra and the contribution of Mathematicians to it. The applications of Linear Algebra in the page rank Algorithm, mobile Networks and Image processing were discussed at detail. He explained the concept of moderation as orthogonality. Finally, he concluded the session by emphasizing on the need of collaborations of people from Mathematics, Computer science and Electronics disciplines.

Day 3                 Wednesday May 23rd  2018
The speaker for sessions I and II was Dr. Boregowda from Tumkur University. He gave a talk on NET coaching for students based on his experience in preparing for NET/CSIR examination. According to him, the following are the key points to be considered for the preparation towards NET/CSIR examination.
•    Students must focus on conceptual understanding of the courses they learn as NET/CSIR examination on Mathematics aims at testing basic subject knowledge and the critical thinking ability oriented to Mathematics
•    The question paper pattern being followed for the NET / CSIR examination was discussed in detail and the blueprint of the question papers were analyzed in detail by analyzing the questions papers from 2016, 2017 etc.
The session III was handled by Dr Smita Nagouda. The session was focused on course conduct and evaluation techniques for Mathematics Lab papers. The following are the outcomes of the discussion:
•    Prerequisites must be clearly specified in the Lab manual so that instruction / learning is more focused.
•    For evaluation, the e-records can be submitted through Google Class room / Moodle. To the maximum, 7 marks is to be awarded for e-records.
•    Lab evaluations to be done in four stages :

•    The evaluated marks is to entered within the range of dates provided in the shared google spreadsheet, so that HOD approves the marks. Once HOD approves, the marks can be shared with the students.
•    Mid semester examination for the LAB must be conducted before Mid Semester Examination for Theory.
•    The detailed template for the Lab Manual along with the details of the course content and the evaluation strategy is prepared.
The Quality Improvement Programme was conducted successfully for three days and the objectives were met to a large extent. Dr TV Joseph gave the concluding remarks and encouraged the faculty to effectively implement the initiatives. In conclusion, Dr Tabitha R proposed vote of thanks.

The second year EMS students took up the initiative of familiarizing their juniors with the CHRIST (Deemed to be University) campus by organizing a campus tour for them. The students were first taken to the Central Block Knowledge Centre where they explained the various parts of the library and got inspired by the motivational quotes displayed on the walls. They were also taken to the UG library and were shown a wide range of reference books available for them. Then they were taken to the Bird’s Park where the students experienced a very calm and refreshing environment. They were also introduced to various eateries across the campus. “Parivartana”, the waste-management wing the university. They showed the importance of segregating and recycling waste and hence instilled in its students a sense of social responsibility. Through this, University has served as a role model for other universities to emulate. Like the icing on the cake, it recycles paper and processes it into notebooks which are then circulated among students and the cost of those books are further used for helping the poor. So “Parivarthana” is a complete system in itself that focuses on those sectors of our society that are in dire need of help and it works towards its upliftment. 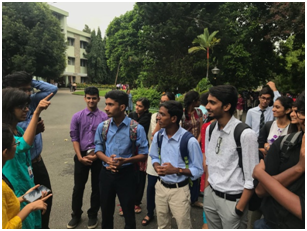 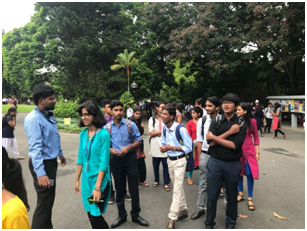 As the campus tour progressed, they were taken to various basketball courts and football fields and cricket grounds among many other sports’ grounds. The mere sight of them enthralled them and were taken aback by their stunning appearance. By the end of the day, the entire pack of first year EMS students were found on the various grounds. “The Gourmet”, the very word strikes a sense of elegance in our minds, and the food served there does justice to the word. By offering many choices in the Continental and Indian cuisine, it has become a place where students flock to during the lunch hours. The Gourmet is not the only place to savour the various delicacies it has to offer. Apart from these they were given directions to the various other eateries and food stalls on the campus by our seniors. On the whole the campus tour proved to one of the best experiences on the campus  as they came to know the vibrancy and magnanimity of the beautiful , lush green campus huddled in the heart of Bangalore city and they all felt extremely privileged to be a part of this institution.

The department, arranged an alumni interaction with final year and Second year BSc(EMS) on the 19th of June 2018 between 2-4. This interaction talk was done by four alumini Ms Chetana, Ms. Nishata, Ms Chahak and Ms Anahita of first EMS batch of 2013.
The need of such talk was needed as third years must cope with not only academics  but it is the time to think about the future ie. What after BSc?. Job, higher studies, diploma, or choose any other option from the endless list of opportunities?
Ms Chetana is in final year MSc(Mathematics), Ms Nishata is preparing for UPSC exam and also an adjunct faculty in Department of professional studies, Ms Chahak is doing her MSc(Actuarial Science) and Ms Anahita is working as Risk Analyst at EY, Bengaluru.
They discussed about the different career paths they choose and the mistakes they have made during working towards reaching their goals. They all had a clear vision and were still striving to reach their set goals. They also discussed about the course EMS and its vast ocean of opportunities. They talked about few career options which included:
1.    Actuarial Science
2.    Research scope in all the three fields- Economics, Mathematics and Statistics
3.    Study of Applied Mathematics and Economics
4.    The beauty of Econometrics as a subject for further study and as a career option
5.    Jobs in Banks, Insurance Companies and handling taxes of the companies
6.    UPSC, civil services
7.    Defence
8.    Finance
They briefed about the competitive exams associated with the career options mentioned in the above list. Dilignce, hard work, consistency and interest towards study and work is the key to be successful. They also discussed various Colleges/Universities in India and abroad that are good for certain fields and their criterion for admissions. They busted the myth that people do not come back to do their higher studies once they start earning. They encouraged to sit for placements too. Actuarial Science, UPSC, Mathematics as a research career was talked about in detail.

On Friday 22/06/2018 between 10-12 Mr Krishana an alumini of 2013 batch, gave a talk on various career paths after BSc(EMS) to final and second year EMS students. He graciously shared his experiences and advice. Mr. Krishna has completed his Master in Econometrics and Mathematical Economics at the Tilburg University and has now been selected at the University of Zurich to do his Doctorate studies in the area of Behavioural Economics. He gave a brief introduction about himself and shared his experiences of his stay at Netherlands. He spoke about his determination and sincerity towards constantly reading at the library and his efforts that helped him pave way for his PhD studies to happen at University of Zurich. He adviced the final year students to learn independently and beyond the four walls of the classroom.

The students then asked a lot of queries, about studying abroad, such as, what is the right time to apply for colleges abroad, to which he espoused that September to October would be the correct time. Another query asked was, which is the most important component of the application that would be considered for admission abroad. In response, he mentioned that there was not one component that had high importance but many, including GRE or GMAT scores and Course Work. When asked about the application process and GRE preparation, he adviced that it would be ideal to attempt GRE twice and go for the second attempt in months. Anyone would tend to perform better that way as the concepts would still stay fresh in the mind.
His talk inspired all the students to pursue our areas of interest with utmost sincerity and focus. Anyone who works hard with determination will be able to reach heights. It was a very interesting learning experience for all the students.
The talk was also attended by Dr. Joshy KJ, Head of the Department of Economics and Dr. Smita S Nagouda, Co-ordinator, EMS Programme, Department of Mathematics, CHRIST (Deemed to be University)