The important objectives of theQuality Improvement Programme (QIP) organized by the Department of Economics are as follows: -

1)    To update the faculty members with recent developments in their concerned disciplines.
2)    To undertake and promote pure and applied research in Economics encompassing all aspects of a developing society in an inter-disciplinary framework.
3)    To undertake collaborative research with national and international academic institutions, non-governmental organizations (NGOs) to improve the quality of research and training.
4)    To interact with eminent visiting scholars from within and outside the country.

In his talk, Prof Gerard spoke on his Phd proposal the Impact of Corporate Social Responsibility on Consumer Purchase Intent: An Empirical Study with reference to Information Technology Professionals in Bengaluru.

He said that in present times, business enterprises and consumers tend to behaviourally demonstrate that they strive to achieve multiple goals; andthat their economic choice behaviour in terms of both scope and objectives has gone beyond maximising functional gains. In the case of consumers, purchase motive appears to have moved ahead from functional consumption utility made up of the criteria of cheap price, good quality and convenience to achieving good quality of social life through the manner of their consumption choices. However, the magnitude of impact of socially responsible criterion on consumer choices is not clear due to the intrinsic conflict between making a moral choice and necessity. Is there an ethical consumer and ethical consumption are the core questions that need answers? In this context, it also appropriate to observe that the notion of philanthropy has also evolved and moved ahead. ‘Giving’ is not merely a socially responsible posture but also a means of responding to social needs. The question still remains whether consumers’ through their choices have the potential to move from ‘socially responsible posture’ to ‘socially responsible response’.

Prof Nadkarni at the end had given his feedback on the proposal. He stated that the proposal needs to emphasis more on theoretical underpinnings of revealed preference theory.

Dr Sheetal started her presentation with noting that the women in the time of the Buddha distinctly felt buttonholed into an occupation that was not of their choosing, but culturally imposed on them based on gender. They compared their own lives with that of men who had the freedom to pursue their chosen vocation, and demanded similar rights. In several verses, the level of dependence of women and children upon the men of the household is amply clear and indicates a clear perception among the women of inequality of social and economic opportunity. Inequality of opportunity among castes, rather than genders, is also hinted at by one nun who has an argument with a brahman over the futility of ritual practices and who finally convinces him to give them up and follow the teachings of the Buddha. Several women complained of their plight and sang praises to the system that provided them with their only escape – the Buddhist nuns monastery. This was an alternative mode of livelihood that involved simple living, and solitary and group meditation. This escape they also wholeheartedly recommended to their listeners who may have been unsatisfied with the lives and looking for redemption.
The broad theme of discrimination shows up much more strongly in the Bhakti era poetry, most likely due to the higher complexity of economic activities and therefore social structure. Some women also actively spoke against the caste system, which formed the basis of the economic and social structure of medieval India. However, the works of the Mughal princesses are largely different from the earlier works purely because these were royal women who did not face the same domestic compulsions that the Buddhist and Bhakti women did. Dr Sheetal concluded her presentation by saying that what impact these women and their works have had on current practices in India is a difficult question to answer. Their lives and works surely trace a thin line from domestic confinement to some level of economic and social participation, but it is not possible to judge their role in this excruciatingly slow evolution.  If it may be accepted that poets are often ahead of their times, and at the forefront of social change, then these women may be said to have had a hand in the improvement of women’s access to social spaces and economic opportunities.
Prof Nadkarni at the end gave his feedback on the paper. The leaned speaker said that the present paper should focus more on economic aspects rather than socio-economic aspects of the History of Indian Women’s Economic Thought.

Prof Joshy K J spoke on his Phd synopsis A Study on Key Determinants of Economic Growth During Pre-and Post-Reform Period in India where he said that the studies examined earlier clearly highlight the major determinants of long-run economic growth in Indian context in the post reform period. In most of the economies similar to India, which pass through structural adjustments or reform measures, long run economic growth is mainly determined by factors like physical capital formation, technological progress, human capital, growth of labour force etc. Neoclassical economists and endogenous growth theories emphasised on the role of these factors in achieving higher levels of economic growth. Some factors like fiscal deficit, inflation etc. influence economic growth only in the short run.

However, their impact is nullified in the long run. Again, some of the studies have proved the prevalence of Ricardian equivalence hypothesis between domestic debt and growth which implies the neutrality of domestic debt to growth. Further, the structural adjustments and openness of Indian economy have fuelled the economic growth in India in the long run. It is necessary to analyse the influence of these factors on economic growth in the short run and long run. Since the external factors play an increasingly important role in determining the economic growth in India in the post reform era, it gives ample scope of research in analysing foreign investment inflow and foreign trade.

This Session was chaired by Prof R Prabhakar Rao, Head, Department of Economics, Sri Sathya Sai Institute of Higher Leaning, Andhra Pradesh, the speakers wereDr Rajeshwari U R and Dr Greeshma Manoj who spoke on their research proposal MGNREGA and Financial Inclusion in Karnataka. The important highlights of their presentations are that the financialinclusion is the key toempowerment ofpoor, underprivileged and low skilled rural householdsas they compose 70 percentage of population in Karnataka. Financial Inclusion can truly lift the financial condition and improve the standards of lives of the poor and the disadvantaged. To fasten the pace of financial inclusion, the Governmentof Indiain 2008declared that wage payments, under the Mahatma Gandhi National Rural Employment Guarantee Act, the world’s largest rural public works programme, would be made through banks and post offices.AsMGNREGAis a widely discussed public policy and knowledgeabout it is the need of the hour, the present research proposal would analyzehow the scheme is helping in promoting financial inclusion via wagepayment through banks and post offices in Karnataka. It will also highlightsome of the problems that are encountered when banks and post offices are used as a means for wage payment to accelerate the speed of financial inclusion and remedial measures that could be taken to tackle these problems.

In this Session Prof R Prabhakar Rao, Head, Department of Economics, Sri Sathya Sai Institute of Higher Leaning, Andhra Pradesh, spoke on the topic Dummy Variable Regression Models. In his lecture, he showed that how qualitative, or dummy, variables taking values of1 and 0 can be introduced into regression models alongside quantitative variables. With the various examples, he showed that the dummy variables areessentially a data-classifying device in that they divide a sample into varioussubgroups based on qualities or attributes (gender, marital status, race, religion, etc.)and implicitly run individual regressions for each subgroup. Now if there are differencesin the responses of the dependent variable to the variation in the quantitativevariables in the various subgroups, they will be reflected in the differencesin the intercepts or slope coefficients of the various subgroups, or both.

Session 9: Opportunities/avenues for External Funding for Subject Specific Projects
This session was chaired by Prof R S Deshpande, Former Director, Institute for Social and Economic Change (ISEC), Bangalore. Prof Deshpande in his remarks said that there are plethora of agencies which provide grant to scholars to conduct research in various fields of Social Sciences which have a theoretical, conceptual, and methodological or policy orientation on the subject of their choice. The scholars will be requested to indicate under which field/disciplines their proposals fall.
He asked all faculty members to follow the general guidelines to apply for external funding. The general guidelines are as follows:
1.    Eligibility for the Grant
2.    Duration and Value
3.    Procedure of Selection
4.    Submission of Proposals
• Research Proposal in not more than 3000 words
• Summary of Research Proposal in 500 Words
• Bio-Data
• Cost Estimation
• Consent Letter from the Affiliating Institution (See Annexure - IV for format).
5.    Affiliation

Dr DivyaPradeep in her talk emphasized that the most important force behind the progress of the research is inner urge and enthusiasm for analyzing the problem of inquiry. In fact, she noted that the best written works are by those who have first-hand experience about the problem and full involvement in it.The objective of the inquiry has to be laid down clearly in terms of statement of the problem. The ‘Topic’ should be the monopoly of the researcher per se and not that of the guide or the supervisor. Researcher’s initiative or enthusiasm for independent thinking should not be nipped in the bud by spoon feeding.The topic should evolve by the self-study by the researcher and possibly may be helped by teachers in defining its boundaries and guiding the researcher in adopting a suitable methodology of analysis. In the case of objectives of the present research initiatives i.e General Objectives and Specific Objectives, the former is a general statement about the problem and the latter delineates the problem in the specific context.

Based on Dr Divya’s presentation, the important decisions taken by the Department on Research & Publication front are as follows:

a) Minimum of 5 publications by the Department faculty members in National and International Refereed journals.
b) Must have presented 6 research papers in seminars and conferences of national and international repute.
c) Should have a minimum of one ongoing research project funded by CHRIST (Deemed to be University)/external funding agencies. 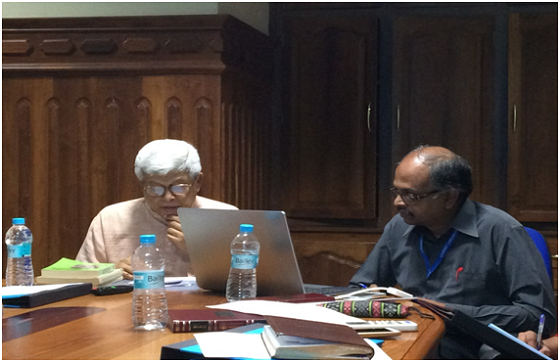 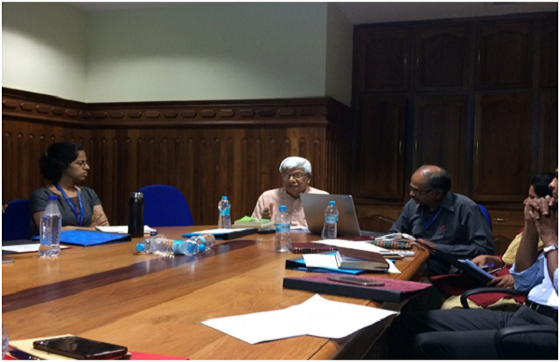 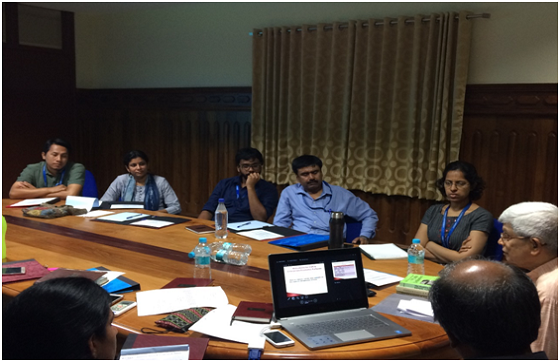 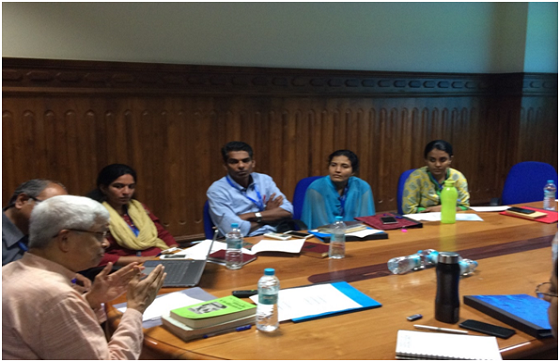