On the 28th of February, an interactive session was conducted by the Department of Mathematics along with faculty from the Department of Physics and electronics regarding an MoU signed with the Catholic University of America. This prestigious institute located in the heart of Washington DC has opened an avenue for interested undergraduate students currently completing their second year at CHRIST(Deemed to be University) to pursue the two remaining years at their university. This opportunity is available to Maths and Physics enthusiasts. Dr Kiran Bhutani, Head of the Mathematics Department of CUA, addressed 30 students across various combinations under the department, regarding the syllabus, scholarship, admission process and possibilities of pursuing Masters in the USA.
Fr Joseph,  Director Center for Research, Dr T V Joseph, Head of the department of Mathematics Dr Paul K T, Head of the department of Physics and Electronics and Dr Mayamma Joseph , Professor, Department of Mathematics attended the session and the students raised important questions regarding eligibility, minimum GPA and the process of application. Dr Kiran further went on about how the students who took part in the exchange program previously, thoroughly enjoyed their experience at CUA.

The exchange program began in 2011 with the transfer of only engineering students and has now branched out to physics and maths due to popular demand. This program encourages young minds interested in the field of research and provides a platform to study abroad at a highly subsidised rate. The session ended with a vote of thanks proposed by Dr T V Joseph.

The Department of English hosted a workshop for teacher trainers of India Literacy Project on 15/02/19 (Friday) from 10:00 AM-4:00 PM at Block 4-  Room 101. Dr.Smita Nagouda and Dr.Mayamma Joseph from the Mathematics department were the resource people.

The title of the workshop was 'Mathematics Teaching-a holistic view'. The workshop focussed on the innovative approaches used in schools for imparting teaching- learning experiences in Mathematics and focussed on implementing different pedagogical methods for teaching Mathematics. The workshop began with explanation on enhancing competency of Mathematics teachers and mathematical experiences in teaching & learning process through strengthening of  KASH (Knowledge, Attitude, Skills, Habits) among participants. The five strands of mathematical proficiency and the attributes of mathematics teachers were discussed in the interactive sessions.

The workshop also encouraged discussions among the participants on paradigm shifts of teaching, assessment and learning Mathematics. The strategies of effective mathematics teaching through problem solving, field work, quiz, debate, presentations and illustrations were discussed. The sessions ended with the emphasis on UNESCO's four pillars of learning with regard to teaching Mathematics in schools.

On behalf of the Department of English, Dr. Sumanjari presented the  vote of thanks appreciating the worthwhile support and contribution of the facilitators of the workshop and the motivators of India Literacy Project for their active participation. The session concluded with the distribution of certificates.

Report on Summer School held on Graph Theory in April 2018

KSTA WORKSHOP REPORT
Department of Mathematics, Christ University in association with Karnataka Science and Technology Academy organized a two day workshop held on 13thand 14th of November 2017 titled “Advanced Topics in Mathematics” for postgraduate students. This deliberative academic workshop brought together eminent professors to discuss various advanced topics in mathematics. The main objective of the Workshop was to familiarize, participants with the emerging ideas and trends of mathematics.

The workshop started with Dr T.V. Joseph, Head of the Mathematics Department, Christ University, addressing the gathering.There were 130 participants from different academic institutions such as National College, St. Joseph’s College, MES college, Bangalore University, Mount Carmel College and NMKRV College for Women including PG students and faculty members of Christ University. The programme was conducted from 9.30 am to 5.00 pm with 4 sessions each day. 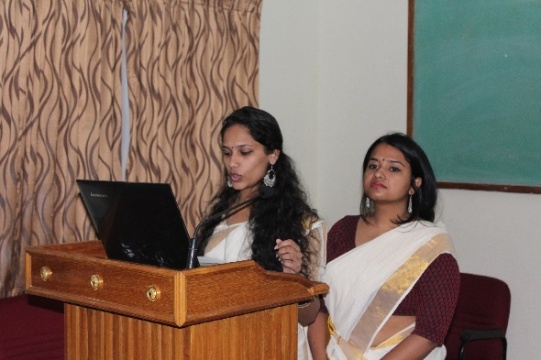 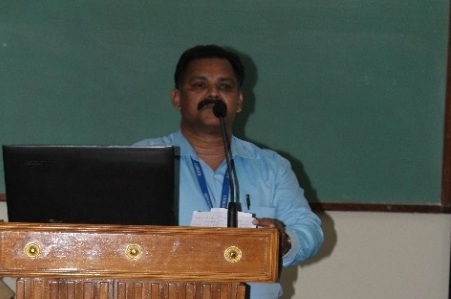 The first session was carried out by Prof. R. Sampathkumar, Department of Mathematics, Alagappa University on “Design Theory and Combinatorics”. He gave us an insight on Ramsey graphs, ranks, hyper graphs, various main theorems of Ramsey graphs and so on. The afternoon session was led by Prof. Pradeep. G. Siddheshwar, Department of Mathematics, Bangalore University  on“How to reinvent concepts in Mathematics to make it more useful-an illustration”. He made us ponder upon the interpretations of several fundamental concepts which we come across often such as slope of the tangent, maxima and minima, partial derivatives, total derivative and many more. Phase space, directional derivative, heat equations, Laplace transform, Convolution and Taylor series were various other concepts he discussed with the Participants extensively. 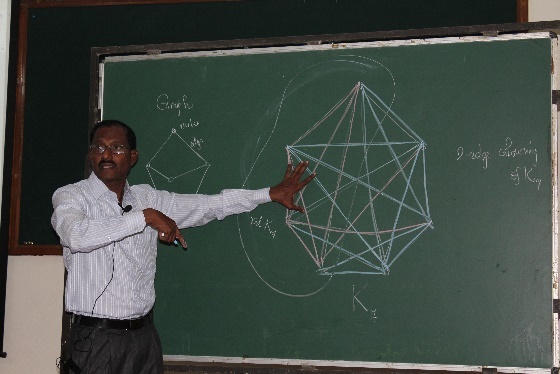 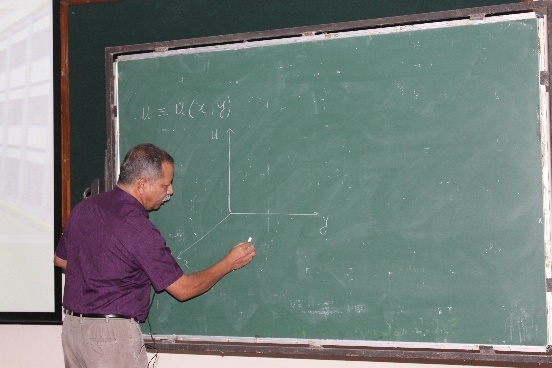 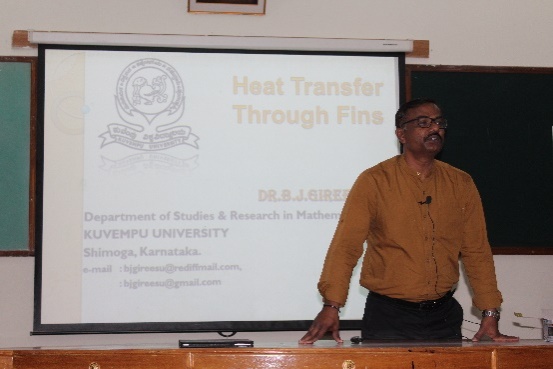 Day 2 (14/12/2017)
First session of the day was taken by Dr B J Gireesha, Department of PG Studies and Research in Mathematics, Kuvempu University on “Fluid Mechanics and its Applications”. The areas of discussion in this session were basic concepts of differential equations, its application in Fluid Mechanics, significance of Reynold’s number and so on. The session majorly dealt with the topic “heat transfer through fins” where he analysed the thermal analysis of wet porous fins for convection and radiation heat transfer. He concluded that radiation, convection and moisture content because of the wet fin, transfers more heat than dissipating heat only by convection. A test was conducted post-session for all the students based on the sessions conducted previously.

The Valedictory session was graced by Dr. S. K. Shivakumar, Chairman, KSTA and and Dr.Surendra Kulkarni, Dean of Science, Christ University. The session started with an invocation song followed by welcome address by Dr.Sangeetha George, Faculty, Department of Mathematics, Christ University and felicitation of the guests. Dr.Surendra Kulkarni congratulated all for their active participation and for the successful completion of the entire workshop in hisPresidential Address. Dr. S. K. Shivakumar inspired and enlightened the gathering with his words of wisdom where he shared his experience of being a part of the team that developed the telemetry system for Chandrayaan-I, India's first lunar exploration mission. He concluded his speech by congratulating the Departmenton the success of the workshop. The session was followed by participants feedback where Miss Deeksha, student, St Joseph’s College and Mr.Majesh, student, National College shared their thoughts and views about the sessions. Prizes were distributed to the winners of the test by Dr. S. K. Shivakumar. The first position was bagged by Franklin of St. Joseph’s College, Second position by Chaitra of NMKRV College for Women and third position by Mashiath Ullah of Christ University. The programme ended with a vote of thanks by Dr. S. Pranesh, Coordinator, Department of Mathematics, Christ University followed by the Christ University anthem. 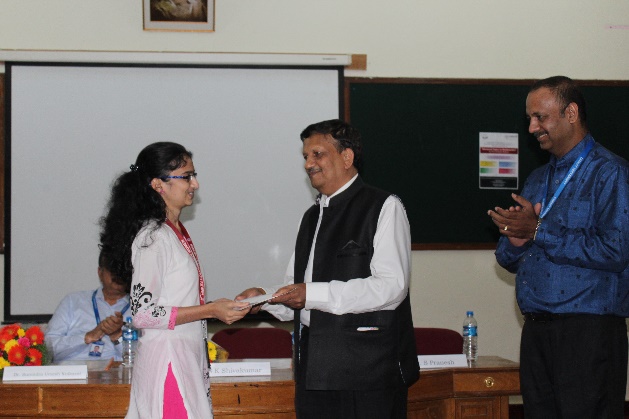 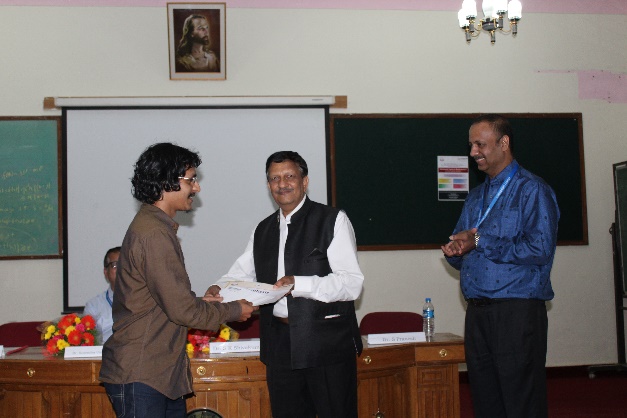 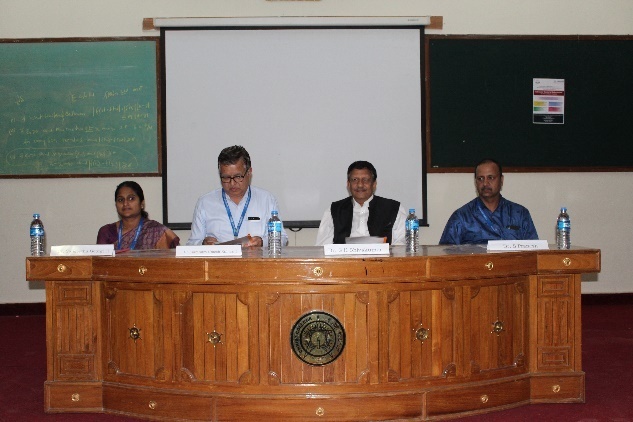 Workshop on an Introduction to Solution of Ordinary Differential Equations

The science week (22 August-25 August) kick-started on 22 August with its inauguration, from 9:30 to 11:00 AM, in the main auditorium. Science Fest 2016 was inaugurated by Dr. S Ramakrishnan, Deputy Director, Indian Institute of Science.

The first event on stage was Dumb Charades. The participants had to go through three rounds. There were two teams from each college. The prelims for Dumb Charades took place for Christ, one week prior to the fest. It drew in a huge number and hence, it was held on two separate days during lunch hour.

Meanwhile, two other events took place offstage. Mathematical Modelling, in room 615, took place from 11:00 to 1:30. The various models were judged by Dr. T.V Joseph, Head, Department of Mathematics and Prof. SmitaNagouda. The prelims for Mathemathical Modelling were also held one week prior to the fest and, the two best teams were selected. The other event was Lecture Contest. It took place from 11:00 to 1:30 in the Assembly Hall, Block 2. The prelims took place in room 615, Block 2 on 27 July at 4:00 pm.

The two open events this year was Finding X and Minute to Win it. These two events were introduced this year. It was a massive success as it saw the participation of 216 students. Finding X took place in rooms 701, 715 and 716 in block 2, from 11:00 to 12:45 pm. Participants had to qualify the written prelims to reach the final round. This event was a modified version of treasure hunt coupled with logical and mathematical solving skills. Minute to win it took place in rooms 503, 504 in block 2 from 2:00 to 3:30 pm. The participants in teams of three had to complete various tasks in one minute. There were 10 rounds. The team that completed the maximum number of rounds in the least amount of time won.

The Jam prelims for christites took place on 29 July at 4:00 pm. Jam Prelims also took place from 11:00 to 12:00 pm in room 625, block 2 to choose the final six participants. Each college were allowed to send two students, but only six participants proceeded to the final round onstage. After Dumbcharades, Jam took place from 12:30 to 1:30 in the main auditorium. The moderator was NamrataNagaraj from 5EMS. The students then broke for lunch from 1:30 to 2:00.

Meanwhile Aircrashprelims took place from 12:30 to 1:15 in Seminar Hall, block 2. The final six participants were chosen from written prelims consisting of logical and mathematical questions and one creative essay. The Aircrash prelims for Christ were held on27 July during lunch hour. The Aircrash event took place in the main auditorium at 2:00 pm. The first round was an extempore round. In the next round the participants were told to be famous mathematicians, and given a hypothetical situation that they were in a plane that was about to crash, and they had to debate out to decide who will use the only life jacket in the plane. The event was judged by Prof. DepakSrinivasan from the Department of English and Prof. Neha Annan from the mathematics Department. The moderator was ex-christite Deepak Hegde.

Puzzles and Crosswords took place in room 715 and 716, block 2 from 2:00 to 3:00 pm.Each college was allowed to send six teams of two, and Christ prelims for the six teams was held on 28 July during lunch hour.

The Quiz prelims took place, from 12:00 to 12:45 pm, in rooms 501, 503, 504, block 2. Each college was allowed to send six teams of two. Christ prelims for selecting the six teams were held on 29 July during lunch hour. It was completely managed by the Msc. Mathematics students. The quiz finals took place on stage in the main auditorium from 3:00 to 4:00 pm. This event was managed by the Msc. Students and was a huge success.

The fest came to a close and the celebrations began with cultural events that was both enlightening and refreshing. There were five varied performances of dance and music. This was followed by the valedictory session. The Chief Guest was Dr. SurendraUmeshKulkarni, Dean of Sciences. The welcome address was provided by Ms. Heba Susan Roy, Student Coordinator, followed by the Guest lecture by the Chief Guest. The prizes were distributed by the Chief Guest to the winners, and St. Jospehs College won the Rolling Trophy. The valedictory ceremony came to a close with the vote of thanks by Prof. Mayamma Joseph, Faculty Coordinator of Convergence 2016. 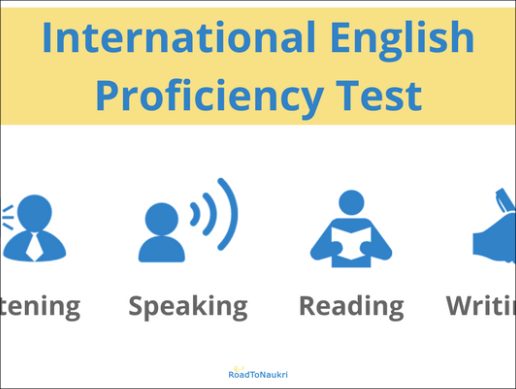 Convergence 2016 was a celebration of mathematics as the very essence of life. It encouraged learning and innovation in the most interesting way. Students from various colleges came together to learn and discover the vastness of mathematics.