The Department of International Studies and History held the inaugural ceremony of two of their co-curricular verticals - Lyceum and Rendezvous - last week on June 26. While Lyceum is the Postgraduate Association of the Department, Rendezvous is the Foreign Student Cell. The ceremony was held in Room no. 911 of the Central Block of the Hosur Road campus of Christ (Deemed to be University).
The programme was organised by the second year students of Master's in International Studies since the function also doubled up as a welcome ceremony hosted by the batch for the Fresher batch of the postgraduate programme. The event, which was hosted by Palak Arora, a second year MAIS student, began with the lighting of the lamp, accompanied by an invocation song performed by second year MAIS students.

Dr. Madhumati Deshpande, Coordinator, Department of International Studies and History, addressed the gathering with a welcome note followed by the inaugural address by Fr. Jose C.C., Pro-Vice -Chancellor, Christ (Deemed to be University).

The students and members of the faculty were then addressed by Aakansha Jaimini, a second year MAIS student who briefly explained the agenda, workings and events organised by Lyceum. Similarly, Bishakha Shrestha explained the objectives and workings of Rendezvous.

The informal part of the event was made complete by dances and singing performances by students from both the batches of the department - the first and second year of MAIS. The fresher batch of MAIS were handed out mobile pop-sockets, which were branded by the Christ logo and a mention of 'MAIS Batch of 2019-2021' on the front-side, as a token of welcome by the second year MAIS students.  The programme was concluded with a brief Vote of Thanks, extended by the second year MAIS student Lesley Amol Simeon.

Rendezvous is a Forum of Foreign Students of the Department of International Studies and History, committed to provid assistance to International students in order to develop an understanding on academic, cultural and fraternity building of foreign students representing varied multicultural background from various countries across the world.
The forum aims at facilitating exchange of ideas and information of students across the globe with respect to their country and enhancing knowledge through mutual sharing.
Under this forum, the department conducted Agoreu. It is an academic fest whose objectives are to allow the international students to have an exposure by presenting various topics related to their areas of interests and it seeks to actively involve them in academic researches and make them feel fully a part of different academic fests organized by the Department.

Agoreu was conducted on 17th of August 2019. It was attended by the Department coordinator Dr. Madhumati Deshpande, HOD Dr. Vagishwari S. P., faculty members and students. The theme of Agoreu was “Independence Struggle” as part of Indian Independence week.
The presenters were Edison Muvikwa - national of Congo, Ahmattidjani – national of Chad, Adriana Macamo – national of Mozambique and Bishakha Shrestha – national of Nepal.

Edison’s topic was “the history and post independence period of Congo” where he shared his knowledge on the early history of Congo to the Colonial Rule. He also demonstrated in brief the independence and Congo crisis of 1960-65, the civil wars of Congo and the current conflicts that have devastated the country.
Adriana explained the different phases of Mozambique’s independent struggle through the war of independence from the colonial Portuguese. She also discussed how Mozambique had to face a civil war due to independence from the Portuguese.

Ahmattidjani emphasized on the independence of Chad where he brought out the geography, climate and demographic importance of the country. He gave importance to the different ethnic groups of the country and how they played a role in gaining freedom from France.
Bishakha gave a brief analysis on soft power contestation between India and China in Nepal. She shared her ideas as to how both India and China are developing their strategies to influence Nepal due to its strategic and geo political importance. 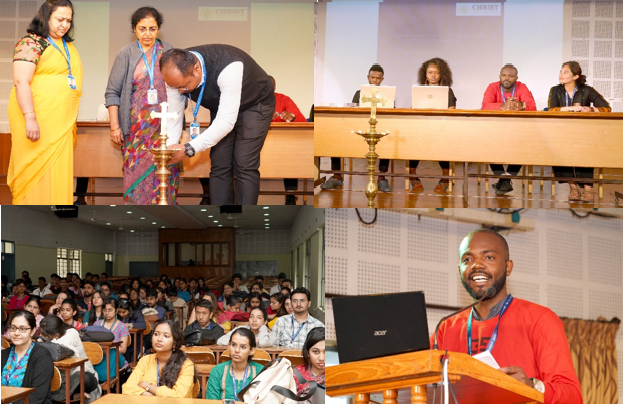 An International Affairs Quiz was held for all the students of CHRIST (Deemed to be University) by LYCEUM, the Post Graduate Association of Department of International Studies and History on 13th September, 2019.Some of the themes covered in the quiz were:

•  Foreign Policies of India, US, Russia and China.
•  Current news and events of international politics
•  General knowledge on countries and their governments.

The quiz witnessed a huge turnout and was a learning experience for both the participants and the audience. 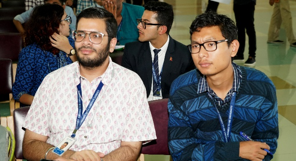 Venue: Assembly Hall, Block II
Time: 11:00 am – 02: 30 pm
The Department of International Studies and History organised International Affairs Quiz as part its PG fest on 28th January 2020. The theme for the International Quiz was ‘Multiculturalism and Migration'.  A total of twelve teams participated in the event. There were four rounds conducted. The first round was a written test round where only 5 out of the 12 teams would be selected.  Since 5 groups got a similar score a bonus tie breaker rapid fire round was put in place out of which 2 groups qualified. The 3rd round focused on Migration, was highly challenging for the four teams and was also a rapid fire round with 2 teams qualifying for the final round while the other 2 were eliminated.  The 4th round was a final round that determined the winners. The event was well conducted with competitive participants who were interactive and responsive to the questions posed. They also showed charisma and perseverance towards the later rounds. The audience was also involved, and provided answers to some difficult questions. The event provided the students with perhaps a more detailed understanding of multiculturalism, and also opened doors to further enhancing their knowledge to understand contemporary issues.  The runner-up for this event was Anchal & Chaitra and the winner was Madhvi & Harman.

Venue: Panel Room, II Block
Time: 11:00 am – 03:30 pm
The Department of International Studies and History organised Classical Debate on 28th January 2020 as part of its PG fest. It had a total of 6 teams consisting of 2 speakers each. The debate was divided into three parts, ‘Opening Statements’, ‘Core Argument’, ‘Conclusion’ and lastly ‘Rebuttal’. The speakers had a time limit of 2 minutes, 5 minutes, 2 minutes and 2 minutes respectively to put forth their perspectives on the given topics. For the first round, the topics given to the participants were ‘Multiculturalism Is a threat to Nation States’ and ‘Society as A whole Benefits From Diversity’. After the first round, 4 teams were selected for the semi-final round and the topic was ‘Immigration Leads to Rise in Extremism in Post-Nations’. The final round was conducted in the Seminar Hall and the topic for the same was ‘Multiculturalism and Collective Identity Go Hand in Hand’. The winners for the debate were Nishant and Aishwarya.
The speakers spoke with great enthusiasm on the given topics and were able to do justice for both the perspectives of ‘for’ and ‘against’. Such activities help students to increase their confidence and public speaking abilities, and also give a stage for the speakers to debate on multi-faceted issues spanning across major disciplines.

Venue: Room 612, Central Block
Time: 09:30 am – 10:40 am
The Department of International Studies and History organised JAM as part of Battles of Brain (PG Fest) on 28th January 2020.The theme of the event was ‘Multiculturalism in Contemporary International Relation Perspective.’ A total of thirteen students participated in the event.
The speakers had to select topics amongst multiple sub-topics under the main theme, which had topics such as ‘Colonialism and Multiculturalism’, ‘Social Conflict Unavoidable Due to Multiculturalism’, ‘Multiculturalism and Collective Identity Can Go Hand In Hand’, and ‘Colonialism Invited Multiculturalism’. The speakers were given 30 seconds to prepare on their topics and one minute to deliver their ideas. After all the speakers had finished their speeches, top five scorers amongst the 13 were selected to participate in the final round. For the final round, the speakers were given 2 minutes to prepare and 2 minutes to speak on their topics. The topics once again revolved around the main theme of ‘Multiculturalism in Contemporary International Relations Perspective’. The runner up for JAM was Bishakha and the winner was Anushua.
The event was well conducted and had a fruitful outcome, in which the speakers were able to keep their diverse perspectives on the topics, and the audience got a chance to listen to their perspectives and widen their own. Such events help the application of courses students study in the classrooms in the contemporary issues.